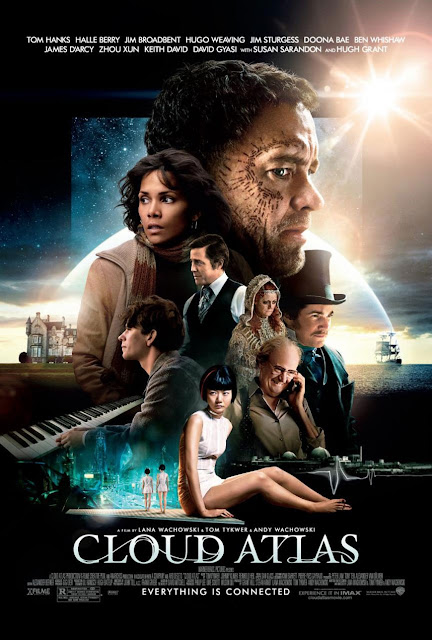 And so says the tagline of the movie that I've waited since the last year. Many locations around the world has already screened this movie before it finally arrived on Malaysian shores (with minimum cuts; I hope?? NOTTTT)

Before I head into some bits and bytes about the movie, I would like to thank fellow blogger Missburunghantu again for sharing the tickets for me to catch the movie before everyone else!; in Malaysia though. =(
*Tickets were distributed by Nuffnang*

I've been waiting for this movie for months ever since I saw the trailer around 6 months ago. A mixture of sci-fi, drama and philosophical statements are blatantly shown in the trailer to induce the eagerness and curiosity of the viewers wanting more. And with free tickets to its movie premier, THAT, I couldn't miss! 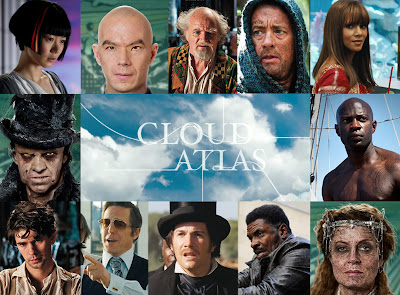 Cloud Atlas is first introduced to the world back in 2004 as a science fiction novel written by David Mitchell with 6 nested story arcs. With great reception and a budget of approx US100 million for the movie, the stakes are as high as EVER! A great cast with noticeable accolades does help in bringing a great story to life. 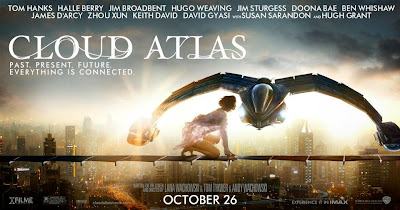 With that said, Cloud Atlas is a movie that explores on how actions of one's individual lives affects one another disregarding the past, present and future. Cloud Atlas has 6 story arcs with some stories directly intertwine with each other and others indirectly. In the beginning of the film, viewers are well introduced to the various story arcs with well documented timelines and eras which the following stories will play out. A piece of advise when watching this movie: PAY ATTENTION in the first hour! No kidding. HAHA!

1849:
A young American lawyer, Adam Ewing (Jim Sturgess) crosses the pacific to the Chatham Islands to seal a business engagement for his father in-law. Subsequently he has fallen ill due to a supposed parasitic worm infection. In fact, he is slowly poisoned by a scheming Dr. Henry Goose (Tom Hanks) who has eyes on his gold. There he too met a slave, Autua (David Gyasi) who came aboard to the sailing ship. 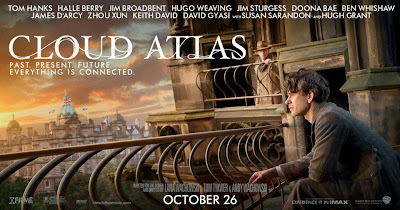 1936:
An aspiring musician Robert Frobisher(Ben Whishaw) bids goodbye to his partner Rufus Sixsmith (James D'Arcy) to work along side a great composer in the form of Vyvyan Ayrs (Jim Broadbent) in Edinburgh. With a telling talent and resilient work horse attitude, Frobisher scripts his masterpiece in the form of the Cloud Atlas Sextet. 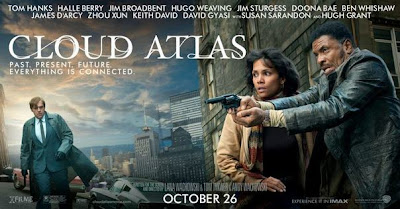 1973:
A courageous journalist Luisa Rey (Halle Berry) tries to find evidence regarding the safety of a new nuclear reactor run by Lyold Hooks (Hugh Grant) with deathly consequences in California. There too she meets an older Rufus Sixsmith with compelling evidence to the nuclear reactor. With Hooks plans under treat, Rey is hot on the heals of a hitman, Bill Smokes (Hugo Weaving). 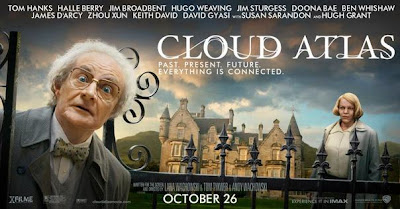 2012:
London, publisher Timothy Cavendish (Jim Broadbent) is tricked by his brother Denholme (Hugh Grant) and sent to a nursing home with a fiendish Nurse Noakes  (Hugo Weaving). There, Cavendish and few of the "inmates" plot their escape from the "nursing prison". 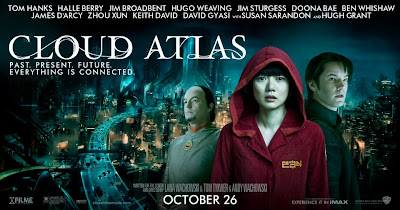 2144:
Old Seoul (Korea) is devoured by rising sea levels which leads everyone to live in Neo Seoul. However, life in Neo Seoul is not like it's used to as the people are heavily monitored by the "Unanimity". Clone fast food worker Sonmi-451 (Doona Bae) soon discovers the will to freedom and escapes the vicinity with Union rebel Hae-Joo Chang (Jim Sturgess). 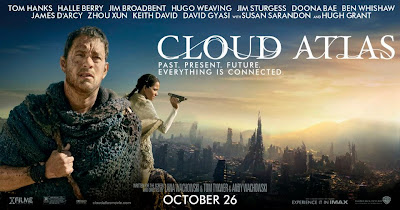 2321:
After "The Fall", life on earth has turn back to a primitive state. In this timeline, Sonmi is regarded as a goddess. Zachry (Tom Hanks) lives in "The Valley" and is visited by a technologically advanced human (Prescients) named Meronym played by Halle Berry. Zachry is not alone in this era as he is constantly haunted by "Old Georgie", a devil who constantly wispers in his ears and affects his judgments. Both Zachry and Meronym heads to the mountains to find a communication station called, Cloud Atlas.


With the various story arcs with its sometimes vague but equally telling connecting plots, Cloud Atlas is a movie that convey messages. Different people might have different opinions, but I will leave mine short. The workings of life remains the same even though  we are in a different time, space and settings. Some things never change but everyone can make a difference!

That said, Cloud Atlas is definite must see, however do prepare some snacks and refreshments as it will take up 3 hours of your life. HAHAHAHA!


A trailer just to beef up one's interest~~