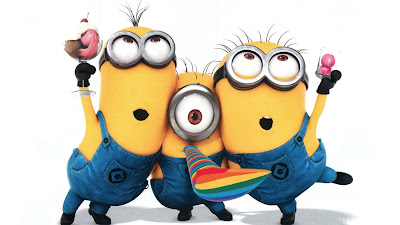 Well I think everyone in this region already know, what has the Minion Fever done to all fans and scalpers alike. How about children if you were to ask? Well, I dont think most of them get a chance to own 1 due to the craziness.

Now let me breakdown the "outbreak" of the fever as below:

Week 1: Minions can be bought within 3 days of release in certain places.
Week 2: Awareness has increased. Within 24 hours it is sold out.
Week 3: People getting "Kiasu" (dont want to lose). By morning it is sold out. Scalpers are now on the move. Certain McDonalds even suffered "structural losses." (Prangin Mall - Penang)
Week 4: Peak! Crowd control by Police required in certain areas. (Bandar Utama - PJ)

One thing I can say is that IT IS CRAZYYYY!! Happy Meal is suppose to be a treat/bribe for the kids during family outings. And not for people to fight and earn money (Yes, I do mean you scalpers out there) from. One of the finger pointing that could have triggered the massive buying via Happy Meals could be the exorbitant prices that these things are selling at Toys R Us or at Parkson. They are just not worth the money.

No doubt, the Minions are cute, funny and I would say well marketed for "awareness". Worth queuing up? I don't think so. As with all animation characters, they will have their peak but their popularity will wane sooner or later. It just doesn't have the collect-ability factor that is marked by characters from series such as The Transformers, Gundams, Sanrio and Marvel just to name a few. These characters have their ups and downs but they do come back and their value is rather much maintained over long periods. No offence to Minions collectors out there by any means. =D

Below are a few examples of the queues in Malaysia: 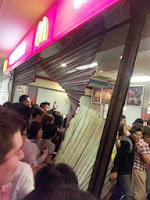 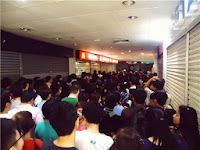 
With my rage out of the way, here is my one and only minion which I got from a basic lunch time meal back in Week 2. I got the evil minion as I think that he's the best looking happy meal toy among the rest with its "real hair" compared to its fully plastic cousins.
Gotta love those drowsy eyes and the protruding teeth. XD

Him together with another fellow evil minion (Courtesy from my friend): 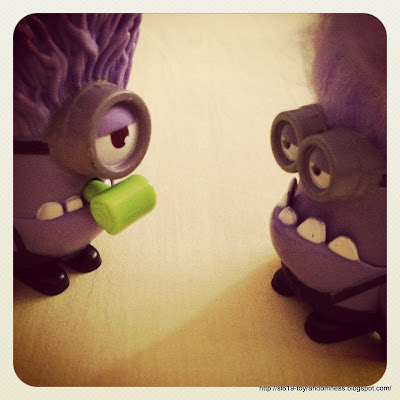 Overall, Happy Meal Minions are are cute and affordable to own but please don't go too crazy about it. If you didn't manage to get via Happy Meals and really want it, you can always buy the official merchandise from your local toy stores.
Cheers Everyone!!